Postato da:
Sintesibagno
First to review this news
“Novellini is an all-Italian company based in Mantua that over the years has become a benchmark in the bathroom furniture sector. It started producing shower enclosures in the 1970s and is still a leader in the sector today thanks to successful products such as the STAR, YOUNG and LUNES models.
But the Mantua-based company has not limited itself to the production of shower enclosures in its more than ten-year history. After shower enclosures came bathtubs, here we like to recall the best-selling product: CALYPSO, and then, in the early 2000s, hydromassage shower cabins, the subject of this post.”

The first cabins presented in those years were HOLIDAY and OCEANIA. They were equipped with hydromassage systems and in the more equipped versions also with a Turkish bath. The walls facing the wall were made of moulded methacrylate. Of course looking at them today the style appears somewhat dated, but back then they were a deserved success and achieved resounding sales figures. The first step in the direction of the more modern style of cabins that came later Novellini presented them to the general public with ANTIS and NAUTIS. In practice he began to limit the use of plastic, increasing the glass parts or replacing them with teak or marine wood details. The shower enclosures mounted on the cabins were clearly the company’s own production models, of which spare parts are always available (HERE the link to the Sintesibagno catalogue). Among the most sought-after spare parts, however, are the thermostatic cartridges. For these models the cabin cartridge is CARTER30P and is the one you will find at this link [ open LINK ] 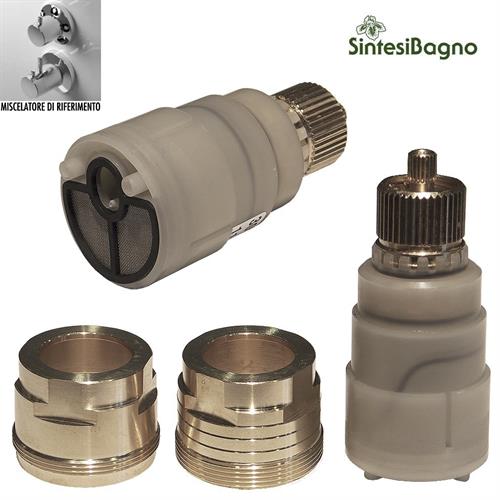 About 10 years after the presentation of the first cabin, a first restyling of the HOLIDAY cabin was made and it was called NEW HOLIDAY. A turning point in style came with the model called: TANGO. in this model the walls were still made of thermoformed methacrylate, but the seat inside for the user was made of a practical and decidedly aesthetic marine plywood top. A short time later and it is the turn of the GLAX programme. The cabins that still represent the modern style and functionality we are used to today are presented here. The acrylic of the two rear walls disappears completely and is replaced by all-crystal walls. This material is more beautiful to look at, more resistant and more practical and hygienic, and therefore easy to maintain. All the curves and folds of the old plastic walls disappear and the interior utilisation space increases, with the result that user comfort also benefits. From here on, there is no turning back. The NEXIS programme was born, then SKILL, then CRYSTAL and HOLIDAY CRISTAL. For all these models the replacement thermostatic cartridge is the CARTEROP10. You can always find it in the Sintesibagno store at the following at link [ open LINK ]